I hate Crocs so much, I bought the t-shirt

Today, we got the following email in our box from our good, good friend Parker. I quite enjoyed reading it and taking a look at the pictures attached! Check it out! 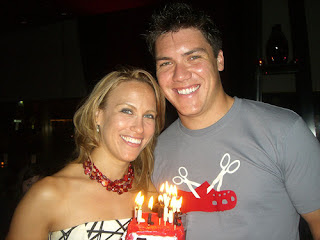 First of all, your shirts are fantastic; my first visit to your site resulted in my purchasing shirts for my sister (who lives in Ann Arbor, MI), my boyfriend, and myself. Washington DC seems to be the unofficial Crocs capital of the world and something needs to be done.

On Friday, I celebrated my birthday with a group of friends and Spencer (the boyfriend) wore his anti-Crocs shirt with pride. Granted, he was denied admission to one establishment (despite his shirt's awesomeness, the bouncer insisted on a collar), but he was showered with compliments all night. I also happen to think he looks damn fine wearing it. I've attached a few photos…Keep up the outstanding work! 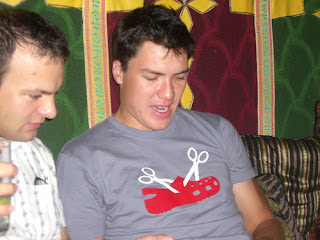 Also, a reporter recently asked me to tell them the story of this site's origins and about our t-shirts and why we hate Crocs. I sent them the following:

I first saw Crocs in high school. My friend, Matt, and I saw this other guy wearing them and we thought they were ridiculous. We proceeded to make fun of them amongst ourselves, jokingly saying that the holes were aerodynamic and for speed. We didn't think too much of them because there was only one person in the class wearing them and he was the token weird guy. Anyway, a month or so later, lots of people are wearing them. And then Matt, the very same Matt who made fun of Crocs with me, had his very own pair. The traitor.

Then, I was reading my friend Kate's LiveJournal. Kate was the only friend I had who was as vehemently opposed to Crocs as I was. Everyone else owned them. She wrote an rant about Crocs on her journal and I thought, "I should buy the domain I Hate Crocs Dot Com." So, I did. I told Kate about my purchase and she said, "Dibs on lay-out!" And thus, our beautiful partnership was born.

My t-shirt design was the first in the shop. It was just a yellow Croc with a 'NO' sign over top of it, like on 'No Smoking' signs. Kate designed the ones with scissors, because she is the graphic design genius. She's really quite amazing in her prowess, I think. We made those and the site really just took off on its own. We were getting a lot of hits fairly early on. We started getting noticed by the press and blogs and such pretty soon after. At this point, we've been mentioned in Radar Magazine, Maclean's Magazine, The Washington Post, The New York Times, Slate, Salon, CBC Radio, The Christian Science Monitor and numerous other newspapers, radio stations, magazines and blogs. Kate and I wrote an article for a newspaper, Emirates Today on the subject.

I hate Crocs because they're ugly. They're chunky, luridly coloured and perforated. They are to your eyes what second-hand smoke is to your lungs.

I just placed an order for my very own ihatecrocs.com shirt! You should be proud Vincenzo. I will send pictures, once I get it.

You know what you need? ihatecrocs.com DOG T-SHIRTS! I would buy one for Mason.

ps-Parker and her boyfriend make a very attractive couple.

I don't really hate crocs although they are one of the most aesthetically displeasing objects i've laid my eyes on lately, its just that i associate them with the white trash that buy the cheap imitations just to be trendy. Whatever gets you off i suppose. I didn't even know these things had a name, i just found out while i was shopping for some shox, and while trying to get some insight i stumbled on your page which -needless to say- is great. Here in cyprus where i live you only see them on lower working class brits that combine them with fake premiership shirts, which again may be the reason these shoes haven't caught on with the local population. Thank God for that. Thinking of, I'll buy myself a pair of knock-offs like all those aforementioned brits do for a couple of pounds, burn them and sent you the video i'll be taking while at it.

Thank goodness you have money to spend in Crocs and burn them after buying.

You know is it just me or is everyone that post Ihatecrocs anything from someother country? Well that would make sense. America is the greatest country in the world, the richest, and the most powerful. Oh yes we do have our share of problems here like our current President, but I wouldn't live any where else. And to prove that I'm right. How many illegal imigrants cross our border every day to find a better life. Thousands. And only criminals try to leave the US. When was the last US citizen caught for trying to sneak into Germany, or England, or Italy, or Mexico, or Canada. Just the criminals. So maybe thats the real reason all of you hate Crocs, Because its AMERICAN. Even the creator of this site is in Canada. What ever, you keep hating and Crocs will keep selling.

I am an American and I hate crocs too. I think I just blew you theory.

Wow you're clueless. I have MANY friends who've left the US not because they're criminals but because the US sucks. Have you ever been to Europe? Japan? Australia? I had to come back to the US for two years, but as soon as I'm able, I'm getting out of this junk heap.

Wow, someone actually took the time to create a site about a shoe that they hate? You must have LOTS of time on your hands. Buying a pair of crocs and then burning them? You still paid for them, which means more money in the pockets of Crocs Inc., so you shot yourself in the foot. LOL

I have the perfect reason for wearing Crocs, and that reason is:

I like Crocs and I will continue to wear them, and anyone who has a problem with that, all I have to say is: "Grow up" and "F*ck you"

I HAATTEE CROCS,, IF U FIND THEM ATTRACTIVE THE UM, I THINK U NEED A CHECK UP FROM THE NECK UP!! THEY ARE THE WORST LOOKING SHOE I HAVE EVER SEEN,, AND I HAVE HEARD THAT CROCS ARE STRUGGLING,, FINANCIALLY.

If you guys dont like crocs, then dont buy them. Anyway, to the proprietor of the i hate crocs shirt, I hate your shirt too. Trying to ride on crocs popularity? This I have to say, it matches your face, its butt ugly!!!